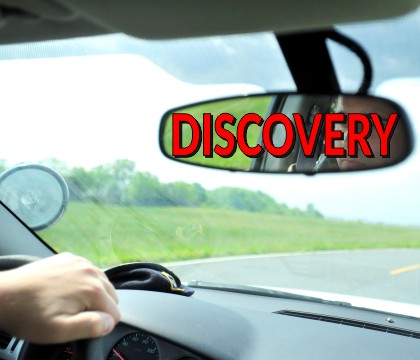 Have you ever considered how important “discovering” is with filmmaking?

I don’t mean finding a ten dollar note in some old jeans to go towards your next short…
I mean providing the audience with the opportunity of “discovering”.

There’s a lot of phenomenal films out there, and there’s some bad ones too. We all know how cheesy some movies can be, littered with dodgy explanatory dialogue.

Jack driving in his car, for no reason starts talking to himself:
“There’s a car following me. That’s the red car I saw tracking me yesterday. I’m going to try and lose it”.

When was the last time you spoke out loud to yourself like that?

So, often films will use a voiceover, to present the dialogue as if it was inside the character’s head. That’s usually naff too, the audience are being spoon-fed a boring plot and are not being treated with respect.

Instead, how about we tell the story through visual means (that is after all one of the points of filmmaking)? Choose good shots that offer the audience a story visually, and direct your actors to explain with their performances, not just the dialogue.

In this case, perhaps we’d already established the red car following Jack in an earlier scene. We’d lingered on that red car so that the audience understood, on some level, that something was occurring. This sets us up for when Jack is driving in this scene. We perhaps have a medium shot of him driving then, noticing something in his rear-view mirror. We cut to a shot of the mirror, with the red car in it, clearly following. We cut back to Jack, who looks alarmed. We then see him change gear and move between lanes at speed…

The audience understand what’s occurring here, and they had to work it out for themselves. They’ve maintained some interest, because they’re actively involved. Interestingly, this “discovery” works on several levels. Most of the audience noticed the red car in the first scene, but it wasn’t so prominent as to be a conscious thought. In the second scene, we make the link between scenes and are consciously thinking about what is occurring.

Sometimes the audience are putting plot points together that the characters in the film haven’t linked yet. This can be a satisfying device, as the audience is eagerly waiting and anticipating as to what will occur. This might be a small detail or incidental plot point, or it might be something critical to the story. These discovery elements are similar to when animals are being fed in captivity. The animals aren’t just tossed their dinner, the keepers hide it around their enclosure so the animals have to discover it. If you’re a monkey, discovering a banana up a tree is far more satisfying than having one lobbed in front of you.

Film endings aren’t always gifted to an audience either, sometimes they take some working out or have multiple interpretations. Films like Twelve Monkeys, Inception or Bladerunner live on as classics, partially because of the debate over their endings.

The type of narrative structure you’re going for will be determined by the type of film you want to make. Whatever the film type or genre, there’s no excuse for a dull, cheesy film that bores your audience. Do better.

You’re often working with many different types of viewer and you can make the film work on multiple levels. Take Edgar Wright’s Baby Driver, for example. The film works for a very casual viewer who just wants to see some action and a cool movie. For those who appreciate more, it’s absolutely stuffed with “Easter Eggs” (little surprises for the viewer to unearth). There’s references, nods and connections between various different elements within the film. I’ve seen Baby Driver five times at the cinema, and there’s still discoveries for me to make on every viewing.

To summarise, when the audience is discovering things for themselves, they are actively engaged; they’re part of the magic of film. If all they’re doing is being spoon-fed basic information, this is a poor experience for them and bad filmmaking.

Respect your audience, challenge them and give them things to discover.

The Production Posse, the ultimate filmmaking membership site, is really starting to take shape. On top of all of the masterclasses, tools and filmmaking content, we’re going to be starting a regular film club. Get yourself along and check the site out here.